The Loon
A child of the Southwest and of the 50s -- a woman who knew me well once said, 'Yeah, the 1850s.' Generally culturally conservative and distrustful of new and improved innovative change. Very seldom overtly serious, but many a truth is spoke in jest and all of my truths are. Worked my way through UT when I was up in my 30s. If I'd, by some horrible miscalculation ended up in Bryan, I would've worked my way through that school over there. Have worked all over in printing and publishing. I've held a bunch of jobs and quit all of them but one. I am a journeyman printer and followed the trade and heard its dying gasps as it was throttled by technological change. I had a sponsored blog on a newspaper but quit the job.

Some interested soul inquired after tango music a little while back. I still go look at tango videos and listen to CDs of Astor Piazzola compositions but have other other South-of-the-border enthusiasms. When we were in Vigo, Spain, a few years back, we encountered a clerk in an Internet café who heard the Mexican in our Spanish and turned voluble. Guy turned out to be an enormous fan of things Mexican, familiar with all sorts of moldy old ranchero singers, crazy about Cantínflas. Wish I'd gotten his e-mail address. Somewhere I have a cassette of Miguel Aceves Mejia that I taped off a vinyl record. Aceves Mejía had a gorgeous voice, as you can hear in this clip from one of those great old Mexican oaters. I used to go to movies like this occasionally when I was a kid in high school. Aceves Mejía could sing a helluva lot better than Gene Autry … just listen to him hit those high notes in this version of 'La Malagueña.'

I was talking about Pancho Villa a little while back. He still remains a powerful figure in the imagination of Mexico, particularly in the North. Vendors on the bridges wore Pancho Villa T-shirts when I used to cross to work. When I was teaching in Cd. Juárez, I had students whose forebears were figures in the Revolution of 1910, including one whose great-grandfather was one of Villa's Dorados, the Golden Ones who were Villa's shock troops. Villa had a real talent for small-unit cavalry actions, but was badly beaten when he came up against Álvaro Obregón, my favorite character from the Revolution. At Celaya, Obregón set up machine guns sited for enfilading fire that shot to ribbons Villa's troops when they tried to deliver the massive charge that Villa called the golpe terrífico, the terrific blow, that was his trademark tactic. From EP Times, July 21, 1923, a story on Pancho Villa after his murder. The writer knew Villa and writes of him in an even-handed manner.

With the passing of Villa the most picturesque character Mexico has produced in modern times takes his place in the history of the war-torn republic. Feeling toward Villa among the Mexican people is divided. To some he was a hero, patriot and a liberator, while to others, who had lost their families and fortunes at Villa’s hands, he was a bandit of the worst breed.

Read the whole thing here. It's from the EP Times blog taken from old issues of the local papers.
Posted by The Loon at 6:50 PM 2 comments:

Jes cuz it tickled me

Guy does some amazing baseball acrobatics. A lift from Rod Dreher's Crunchy Con:

Guy who sends me stuff sends this link to some spectacular photos of the Iceland volcanoes. Go look; they're cool. When we start getting all confident about the stuff we can engineer with our amazing technology, I do hope we will remember the Iceland volcano episode. Word is that there are some volcanoes percolating out West with the potential for more mischief than you can imagine. Ultimately, it's Nature's world, not ours.
Posted by The Loon at 9:01 PM No comments:

Poking fun at the Vicad

I just realized that's it's been forever since I made fun of the Vicad, not from any lack of fun to poke or suddenly discovered regard for the poor rag, but just my natural indolence exacerbated by the onset of warm weather.
From a cutline on Page A6 today: 'A gift from his sister, Spot, a stuffed toy dog, was Bryan Kalina's companion through the early years of treatment for cancer.' I think we do girls a disservice by the frivolous names we give them, but 'Spot' is way too much. Or did someone bobble that?
Posted by The Loon at 8:56 PM 3 comments:

I piddled away a week without putting anything up here. About to go out to the **Adrift Friends of the Library fundraiser, and then this week we have the book sale at the big library in Port Lavaca. A big week for bookishing.
Felt a great glee at the charges against Goldman Sachs, even if they are merely civil. Criminal could happen yet and should, if we can believe the man, financial analyst Max Keiser, who delivers this gorgeous rant calling the big bankers terrorists worse than Bin Laden.


An astonishing vid of a narco raid on Creel, Chih., a town up in the Sierra Tarahumara, a town with a rough reputation. It's jerky video, but you can tell what's going on, and it's nothing good. They're just having a good time tooting coke and killing people. Poor Mexico …
Posted by The Loon at 3:17 PM No comments:

Just wouldn't be spring without an amaryllis picture on the blog. 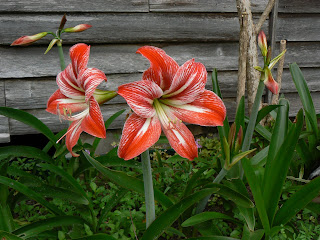 They're popping all over the place now … always a nice moment in the year.
Posted by The Loon at 9:51 PM 4 comments:

The latest from Medicine Lodge

The Gyp Hill Premiere of Medicine Lodge, Kan., offers a likeable bit of writing on a local cemetery, drawing liberally on a journal published much earlier in the town: -

On March 4, 1887, The Chief reported:
On Thursday evening of last week a young man 19 years of age, named George Castine was shot by the postmaster, David Stewart, of Elm Mills. It is charged by the postmaster, that Castine was attempting to rob the office at the time of the shooting, and the circumstances surrounding the case, seem to bear him out in the charge. Young Castine died on Friday, from the effects of the wound and a coroner’s jury rendered a verdict of justifiable homicide. It is a sad affair and should be a warning, boys, that there is no safety except in honest, manly conduct.
This shooting caused an uproar that resulted in the arrest of George’s father and sister and a much debated subject of who was in the right and who was in the wrong.
George Castine is buried in the Highland Cemetery.

There's a lot more here, including a son of one of the original Siamese Twins and an ex-slave who prospered in the all-white Kansas town. Wandering around in newspapers is one of the joys of the Net.
Posted by The Loon at 9:24 PM 3 comments:

Paid obituaries are mostly dull recitations of imagined virtues of the deceased – how much she doted on her cat or how he loved sports – but occasionally one gets the flavor of the departed in a way that no staff-written obit could ever do. In illustration, I offer from the Chronicle the obit of Edward 'Coots' Matthews, half of the team of Boots and Coots, oil-well firefighters famous everywhere:

Upon his return home [after WWII], armed with the GI Bill, [Matthews] attended The University of Houston "for three days, until I found out how stupid I was." In truth, little money and no transportation sent him back into the work force. He opened a beer joint called "Cabin in the Pines" and he would tell you with great pride that he was the youngest person in the state of Texas to be issued a liquor license. While he was having a lot of fun, he was not making any money. In 1947, he sold his business and went to work for Halliburton. Coots worked for Halliburton for ten years as a roughneck, then cementer and finally a special tools operator. In 1957, Halliburton fired him over a dispute concerning his driving record. They said that he had wrecked seven cars in ten years, and they could no longer afford him. His version was that they worked him to death and he fell asleep at the wheel all seven times.

Read the rest here. Go on. It's worth the click. Edwards was a great American personality of a sort running short these days. It's a nice life and a nice piece of writing.
Posted by The Loon at 2:57 PM 2 comments:

And Baja California, too. That would actually be Senora, not Sonora, nor señora

but no doubt some señoras were likewise shook up. A quake south of the line out there Baja California way is reported at 7.2 Richter magnitude, nothing against Chile's 8.8 of Feb, but nothing to sneeze at either. Here is a U.S. Geological Survey Web site with nice little squares you can click on to look at the various recent temblors in northern Mexico. Apparently no life lost, as that part of the country is sparsely populated mostly. [Later: Apparently a couple of people were killed, per late reports]. An earthquake will realign your thoughts on life's solidity. If the ground can move under you, nothing can be counted on. Been a lot of stuff going on this year out on the Ring of Fire around the Pacific.
I had a student whose family was caught in the big Mexico City quake in '85. She said her mother, a very pious woman, was praying aloud and the fervor of her prayer increased with the intensity of the shaking. My student said that finally her father shouted, "Carmen, quit praying! You're making it worse!"
Just threw that Beetlejuice video in because I love that movie, one of the world's perfect little things. [Later later - Got the Beetlejuice 'Shake Shake' vid. It's more fun than just the singing.]
Posted by The Loon at 6:38 PM 2 comments:

Near-and-dear who sends me stuff sends this from the Austin American-Statesman to the effect that UT has asked exchange students in Northern Mexico to come home for their own safety.Read that story here.
In other chaotic news, New Mexico Gov. Bill Richardson has called out state troops to guard the border after a rancher was apparently killed by a border-jumper just over the Arizona line. The bootheel of New Mexico is some pretty rugged territory and there's a lot of illegal crossing going on there and over to the Columbus/Palomas area. Remember that Columbus was the site of the famous Pancho Villa raid in 1916. That attack provoked the Punitive Expedition led by Black Jack Pershing. Mexicans like to nannyboo us because Pershing never caught Villa, but it's worth noting that the Centaur of the North was reduced to hiding in caves like an animal and never did anything much thereafter.
And from the Web site of the world's worst newspaper, a Dallas Morning News story on border fracases:

EL PASO – Texas law enforcement officials are bracing for a bloody weekend along the border, advising farmers to arm themselves as signs across northern Mexico point to a new escalation of violence after coordinated drug cartel attacks against the military this week.

Read all that story here. Just like the old frontier days, plowing with a musket across the plow handles in case the hostiles attack, except now I guess it'd be a Winchester behind the tractor seat.
Posted by The Loon at 9:10 PM 1 comment:

Headline in the Irish Independent online:
'Writer held after pot bust in Weed'
Really, the town is named Weed.
Posted by The Loon at 6:51 PM 3 comments: